Don't know if anyone can help me with this issue, but here goes.

I have a copy of "Panzer" by Claes Sundin, a book of profiles which includes on p111 a side view of a Jagdpanther supposedly of "Hohenstaufen" (9 SS Panzer) which was crewed by the post war German novelist Gunther Grass. It shows this as a G1 version in Terschen (Deein) Czechoslovakia, with a Dunkelgelb and Dark Green striped finish and no codes. This would have to be in 1945, following on from "Spring Awakening".

I've searched the internet unsuccessfully for any trace of a picture that this profile could have been based on, nor can I find it in my references on Panthers and Jagdpanthers. I don't have it in the unit history either, although the division did have 8 Jagdpanthers as late as March 1945. To me it seems unlikely to be a G1 this late, especially since "Hohenstaufen" didn't have any of this vehicle until at earliest November 1944 when it was being rebuilt for the Ardennes after fighting in Normandy and Arnhem (at Arnhem, "Hohenstaufen" had no tanks of any type), by which time all the major upgrades had been done.

Would a G1 have the early type internal mantlet? If so, I've definitely bought the wrong kit to make this vehicle, as I have a Tamiya Late Type (G2) with bolted external mantlet and crew heater on the rear deck.

REPLY & QUOTE
LEO_CL (Leonardo Alarcon) said
Hi.
I don't have the book......are you talking about the JPanther n°401???....wrecked in Hungary. I am not sure, but the JPanthers reported in Czech Republic belongs to another unit.
For the 401 the Tamiya kit is not the option for out of the box.....you need change the mantlet and the gun too and others modifications. I have the meng g1....I believe is the kit for your project.
Regards,

REPLY & QUOTE
dhines (Dale Hines) said
Hi Steve, there is a left side artists pic on page 279 of SS Armour on the eastern front 1943 to 1945 by Velimer Vuksic It is a G1 with zim. Tri colour stripes with a balkenkreuz in the center with no numbers. Not sure what it is based on,but it says Hungary 1945. Best regards.........Dale

REPLY & QUOTE
marcb (Marc) said
Gunter Grass was with 10 SS PD Frundsberg.
They received 10 Jagdpanther in Feb 45.
They might have been G1's which are made by Dragon (#6924).
This link mentions them:
https://www.tapatalk.com/groups/missinglynx/jagdpanther-air-intake-vent-on-roof-t317490-s30.html
The one mentioned might be this one: 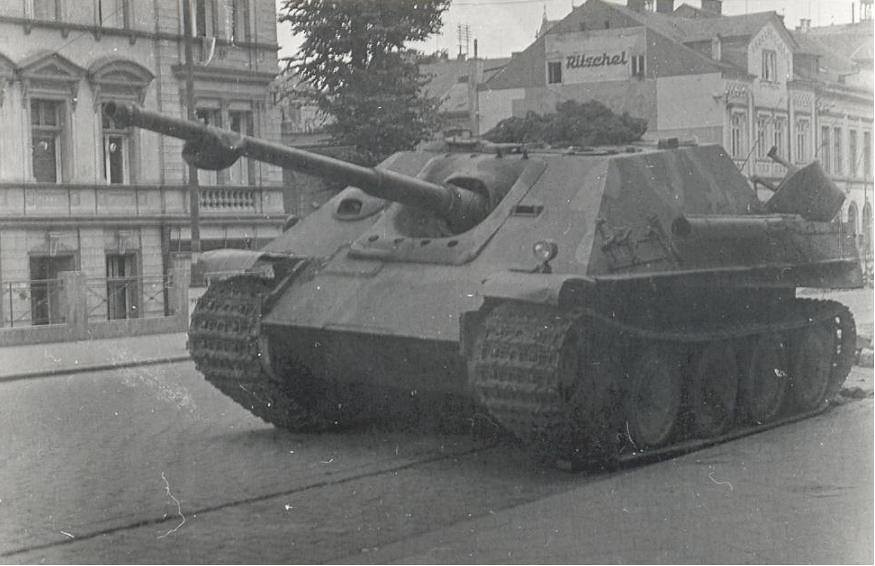 "A black cat crossing your path signifies that the animal is going somewhere."
Groucho Marx

REPLY & QUOTE
Hohenstaufen (Steve) said
Thanks guys, I knew you'd come through, although strictly speaking not in the way expected! I'm pretty sure the Jagdpanther in Marc's photo is the one used as the basis for the profile I'm on about. The camo pattern matches so closely I'm sure it's the same vehicle. Not sure whether it's two or three colour though, I think it could be interpreted either way. But this makes the profile wrong in several ways anyway: 1) Gunther Grass was in 10SS not 9SS, which makes the vehicle of less interest anyway; 2) the vehicle belongs to 10SS, the link backs this up, see 1; 3) it's a G2, not a G1, it has the bolted mantlet very prominent and visible, also the single periscope for the driver. You can't really tell from this angle what the exhausts are like or whether it has the heater due to the debris on the engine deck. So I shall do what I usually do and go with a colour scheme I like and no markings but crosses, usual "Hohenstaufen" practice!

You can build the Tamiya kit as a late G2. (Option B.)

Panzertracts mentions that the tools on the G2 were relocated to the engine deck and rear hull plate. 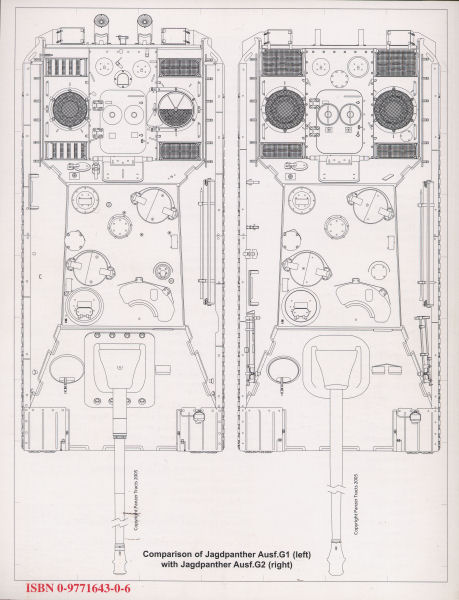 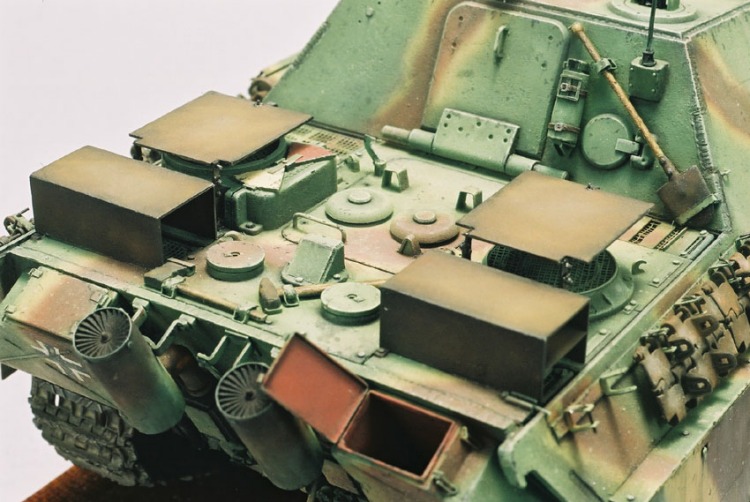 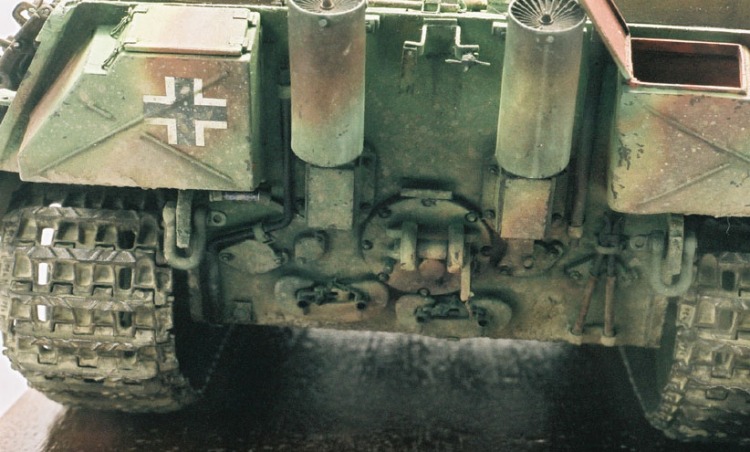 "A black cat crossing your path signifies that the animal is going somewhere."
Groucho Marx

REPLY & QUOTE
Hohenstaufen (Steve) said
Thanks Marc. The kit I have is Tamiya's 35203, which is definitely a late G2, with no other options. Changing it to a G1 would require so much work to the top of the hull and extra expense as to make it pointless. However your additional information on Gunther Grass and the errors made in the unit allocation of the featured vehicle in Sundin's profile makes all this irrelevant. I will just complete the kit as a G2 with a generic colour scheme. There is no evidence of what "Hohenstaufen's" vehicles were, G1 or G2. As I said, it seems more likely to me that they would be G2s, although it is possible they were inherited from another unit or the unit was "absorbed" in the chaos following "Spring Awakening".

REPLY & QUOTE
LEO_CL (Leonardo Alarcon) said
Only a comments, about "no markings but crosses" I understand was not an usual practice of Hohenstaufen, at this stage of the war. Pictures of JpanzerIV, Panther and JPanthers from this unit (late 1944 and 1945) show in general White Solid Numbers located between the center to the rear of the side armor.
Examples, Panthers in Ardennes and Nordwind; JPanzerIV and JPanthers in Balaton.
Regards,

Thanks for the input. Any chance of links to these photos? I have both the Furbringer book on "Hohenstaufen" and W. Tieke's on II SS Pz Kps, but no photos of this type. "Hohenstaufen" was not involved in "Nordwind", that was "Frundesberg" and it would seem pictures of these two units are often mixed up. I've also seen pictures that definitely show "HJ" vehicles labelled as "Hohenstaufen" (particularly in the "Spearhead" title on the division).None of the photos in Furbringer's book show codes or divisional markings on armoured vehicles, although softskins frequently have a variant of the div sign in blue and yellow. The best known "coded" picture of a "Hohenstaufen" vehicle is of a Sdkfz250 from the Aufklarungsabteilung in Arnhem. This has code 7301, which doesn't fit into any coding system.

REPLY & QUOTE
LEO_CL (Leonardo Alarcon) said
Hi.
You can do a search in Google, for Ardennes Panther 421 or 212:

For Hungary, here an example of JPzIVL70:

REPLY & QUOTE
Hohenstaufen (Steve) said
Thanks Leo. I've looked at these pictures and although they bear out what you say, there is no definite link to "Hohenstaufen". The Panther in the Ardennes I think has been attributed to other divisions, usually "HJ" and this to some extent summarises my problem - it is very difficult to find genuine clearly attributable photos of "my" division (except around Arnhem). I could accept the Ardennes Panther if it is in an area known to be fought through by 9SS (although it could still be a Das Reich vehicle, as they were twinned in II SS Pz Kp at the time), so I don't have a beef with that, but "Hungary 1945" is far too vague, there were at least 6 of the 7 Waffen SS panzer divisions in the area, Leibstandarte, Das Reich, Totenkopf, Wiking, Hohenstaufen, Hitler Jugend - I think Frundesberg was in Pommerania at the time. There were also, of course, numerous Wehrmacht division and panzerjager abteilungen around.
Having said all this, it would be as good a way to go as any, crosses and white numbers - generic.

REPLY & QUOTE
LEO_CL (Leonardo Alarcon) said
Sorry Steve, but there is no doubt that Panther 212 belongs to Hohenstaufen. About this topic (Hohenstaufen) you can check the book "Panther" by Canfora. In this book you will find information about Panther AJ9, 212 and a Jagdpanther too from this unit.

But, finally the point is to focus in your project.
Can you put the image of the Jagdpanther from your book?; is the same pasted here in this topic?

REPLY & QUOTE
Hohenstaufen (Steve) said
Leo,
I've checked out the Panther book you suggest on Amazon, but at £85+, I'll take your word for it. I think we've established that the profile I was using was wrong on many counts, so there's no point in posting it, as it's no longer relevant. As I posted earlier, it looks like the one in Marc's photo, which is in all probability from 10SS, close but no cigar! I wouldn't mind seeing the "Hohenstaufen" Jagdpanther picture you have though, if you are OK with that, especially if it's a G2.
I don't know about you, but I often find reference books frustrating, in that books about vehicles will cover every minutae of detail about the vehicle but not link them to units, while unit histories tend to be text based without pictures of the vehicles concerned, or if they have, they vaguely refer to them by type.

REPLY & QUOTE
LEO_CL (Leonardo Alarcon) said
Steve, the profile of the Jagdpanther is not in the book, only the picture in very good quality.
In any case you can find the picture in Google, search Jagdpanther 401.
Is a mix, G1, but one piece gun, the mantlet is with bolts but not the late version.
I want to build the 401, and I bought the meng kit and I can tell you that with this kit you have all the choices to build a G1.
Regards,